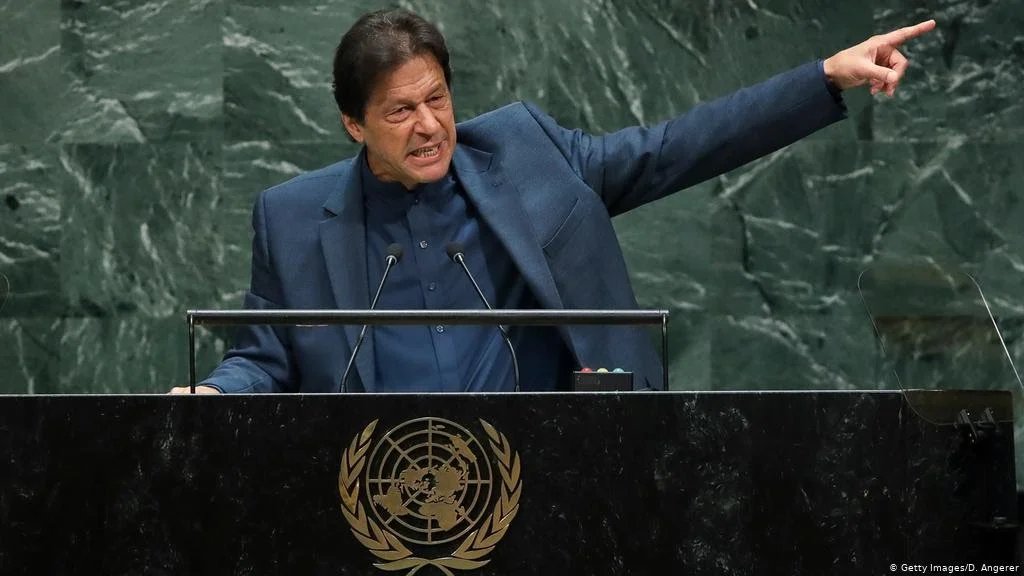 The K-Word Beyond the UNGA Sparkle

On September 27, the Pakistani Prime Minister addresses the 74th session of the UN General Assembly and makes a convincing speech, the focus of which is the K-word. The Cricketer turned politician spends more than half of his speech time on what appears to be the biggest Nuclear Flash-point in the 21st century in the world. As he completes his speech, not only Kashmir gets internationalised but a moment to remember in the UNGA is also recorded. However, with that sparkling speech that predicts or more accurately, warns the world of a bloodbath once the curfew is lifted, comes great challenges both at home and abroad for Khan’s government.

The Pakistani premier made his best to project Kashmir’s plight to the world. His effort at the UNGA was highly admired by the people of Jammu and Kashmir under lockdown now for more than 60 days, reported in a recent story by Riffat Farid for Al-Jazeera. Similar if not warmer admiration was earned by the former Pakistani Captain and the incumbent prime minister at home where masses hailed him for convincingly advocating Pakistan’s cause in the world’s highest forum. Imran Khan’s UNGA speech became the top twitter trend worldwide and trended on Twitter India above Prime Minister Modi’s. All these achievements aside, let us try to picture the K-Word and Khan in the long run and beyond the UNGA sparkle.

PM Khan exhausted all his diplomatic cards and quite rightly by warning UN of a ‘bloodbath’ when the Indian Army would lift curfew but the most important warning was of a nuclear war between Pakistan and India whose consequences would not be limited to the two belligerents. Before discussing whether a Nuclear War on Kashmir is an option, its inevitable to see whether a conventional war between the two, in a nuclearised South Asia.

Undoubtedly and not surprisingly, the Pakistani PM convinced the world that a major catastrophe was brewing for the globe which would soon catch two of the largest militaries of the world locking horns over Kashmir. He told the world that if an intervention by the International Community was not made to lift the siege, a major war awaited the world. “I feel we are back in 1939; Munich. Czechslovakia has been taken”, said he, emphasising upon the critical nature of escalation existing between Pakistan and India. These convincing arguments with examples from world history definitely undermined Indian narrative that everything was fine in Kashmir but another consequence was the pressure on Pakistan, generated by these sparkling statements in the UNGA.

The possibilities of Pakistan initiating a conventional war over Kashmir cannot entirely be ruled out, however, the prospects of such an event are very limited if one puts himself in Prime Minister Khan’s shoes. He has been repeatedly stating that military offensive was out of question. He also stated that Pakistan would befittingly respond to Indian aggression in Pakistan Administered Kashmir, which showed that offence was not being considered. Earlier, Foreign Minister Shah Mehmood Qureshi had candidly stated that Pakistan was not looking at military options, which shows that practically, Imran Khan’s government is on the defensive and not on the offensive as it attempted to appear in the UN General Assembly. A review of what Pakistan did since August 5, which was also uninterruptedly featured on Rationale 47’s Escalation Cell, it appears that the Islamic Republic is pinning all its hopes on the International Community and there is little which it could offer to Kashmir itself.

On the other side of the border, there have been provocative statements from the Indian officials after Pakistan’s offensive rhetoric. Indian Defence Minister Rajnath Singh stated that India’s Nuclear No First Use Policy (NFU) was subject to the circumstances and no guarantee could be provided whether India would stick to it in the future. Indian Home Minister Amit Shah also issued aggressive statements regarding Pakistan Administered Kashmir and vowed to lay his life down for it in the Indian parliament. Indian senator Subramanian Swamy of the BJP kept stating that India’s next adventure would be Pakistan Administered Kashmir after revocation of article 370.

India’s offensive rhetoric should be seen in the strategic context to determine whether or not it carries weight. Revocation of Article 370 was something Modi’s BJP had promised to the masses prior to Elections 2019 and was not out of the blue. Surprisingly, it took Pakistan off guard despite the fact that many had seen it coming and Kashmiri politicians Omer Abdullah had even tweeted the propects of such a move before August 5. The move itself was enough provocation and the only challenge India had to deal with after it was to sustain it while rejecting all the criticism using its strong diplomatic channels and lobbies across the globe. Prime Minister Modi embarked on his visit to Middle East and neutralised an entire bloc Pakistan proudly considered was of its ‘brotherly muslim allies’. Considering these developments, an Indian offensive in Pakistan Administered Kashmir appears more rhetorical and less real.

Much more than India, the ball is now in Pakistan’s court as it is Islamabad not Delhi that has to be back to the drawing board and come up with a pro-active Kashmir policy that would put India on the defensive. PM Khan’s worry is right, that the world is appeasing the market of 1.2 billion at the expense of justice and humanity but this is how it is. Great diplomacy would make it irrational for major powers to appease such a huge market, which has hitherto not happened.

Kashmir is a multi-dimensional dispute whose history is shrouded in more than 7 decades and hence should always be seen in the long-run. Yes, immediate response is inevitable but loses its value if it is not coupled with a long-term policy and a relevant mechanism to implement it. Pakistan seriously has to consider Sun Tzu’s advice which is very relevant in the current situation that “strategy without tactics is the slowest route to victory, tactics without strategy is the noise before defeat.” Prime Minister Imran Khan has repeatedly called himself the ambassador of Kashmir to the world, which is a warm statement, but that does not mean he is absolved of his role as the Pakistani premier to shape the course of freedom for Kashmir.

About The Author
Abubakar Farooqui is the brains behind Rationale 47. He Studies International Relations at Quaid-i-Azam University, Islamabad. His areas of interest include National Security of Pakistan and International Politics, particularly of Afghanistan and Middle East. He tweets @AbubakarTweets

The views expressed in this article are solely those of the original author and do not necessarily reflect or represent the views of Rationale-47.

View all posts by Editorial Team

3 thoughts on “The K-Word Beyond the UNGA Sparkle”